The next stop on our Tour is THE DAY CREEK TRAILHEAD

Businesses giving back to OUR community, is what continues to make Rancho Cucamonga so special.  With the continued success of residents and visitors incorporating exercise on the Pacific Electric Trail, there is always room for additional amenities for the community to discover and enjoy.

The newest shopping center at Day Creek and Baseline is no exception.  Through the generosity of the property owners / developers designed and installed an exceptional trailhead at the street crossing adjacent to the Fire Department for walkers, runners, or cyclists to enjoy.  Its beautiful design and location add to the charm of the neighborhood and is a convenient place for the public to meet up and enjoy a picnic meal.  The trailhead features shaded seating, several picnic tables, a bike fix-it station, bike racks, doggy station, trash cans and a water fountain that is pet friendly.

The tradition of amenities along the PACIFIC ELECTRIC TRAIL help increase the user experience, whether you are walking your dog, commuting, rollerblading, running or cycling.  Vision combined with synergy for our community created this beautiful amenity for the neighborhood to enjoy.  Are you a “Trail regular” who enjoys amenities on the Trail?  Please comment below.

Posted by Friends of the PE_TRAIL at 10:12 AM No comments:


The Alta Loma Packing House was built in 1926 and is one of the few remaining remnants of Cucamonga’s rich citrus and wine industry. From the packing that was situated on the rails of the Pacific Electric Railroad, produce was shipped all over America. There was another NEARBY packing house that was built in 1913, but sadly it burned down in the 70’s. 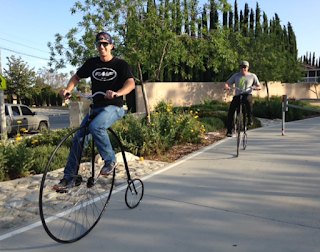 In the early 20th century, there were competing “citrus grower” associations in the area and in 1920 they merged to form the “American Fruit Growers.”  This consortium convinced Henry Huntington to adjust the Pacific Electric rail line north into Alta Loma to help the growers get their harvest shipped sooner, instead of loading and unloading their trucks to transport into Pomona.

After the use of rail lines diminished completely in the early 1990’s, the packing house fell into a dormant state and stood as a reminder of the citrus and wine industries that flourished here for decades.  In the last few decades, it had been a discount goods store, a Vegan Grocery store, as well as a bicycle co-op location that provided free bike repair for cyclists on the adjoining Pacific Electric Trail. 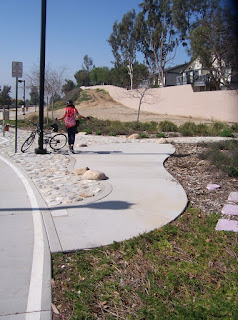 It is currently under new ownership and the management team is developing a complete renovation to transform over 27,000 square feet into a thriving business center and public market that will include: shops, restaurants, bike parking, and distilleries and more. The vision for this beautiful packing house will breathe new life into the Alta Loma neighborhood and become a destination place for walkers, cyclists and visitors that enjoy the Pacific Electric Trail.  We look forward to its revitalization! Did you ever wonder if the Alta Loma Packing House will be restored?  Please comment below.

Friends of the Pacific Electric Trail

The Chaffey Brothers are some of the most important entrepreneurs that helped transform the Inland Empire.

The sons of George Chaffey Sr. bought this house in 1881 from a retired Portuguese sea captain named John Garcia. The father had come from Ontario, Canada with hopes of helping his illness, which was the dreaded tuberculosis, called “consumption” back then.

It was recommended that the warm dry climate in Riverside would help him.

Sadly, he died a short time afterward, but the sons realized the area was ripe for development and in this regard, they brought water from the hills to the north of the immediate area and aided in the development and future expansion of the citrus industry.

“Etiwanda” was named by the Chaffey’s after a Canadian Indian Chief. The house also was quite original and the first to have electricity in the greater Los Angeles area.

Working in real estate, land management, hydroelectricity, and especially advertising the Chaffey family were instrumental to the development of the area. Because of their vision, thousands of people from across Americans hungry for farmland, wide open areas, and a chance to start over, arrived due to the lure of the brothers advertising. They had tour trains scheduled to bring in investors of all sorts from all over the country. Their efforts put Etiwanda / Cucamonga on the map and today, there are schools and streets that bear their name that attest to the important role they played in our history. 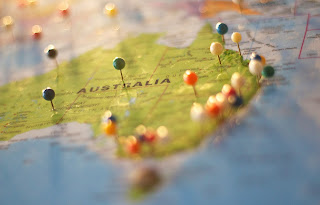 After securing their foothold in the area, several of the brothers looked to new areas to work their magic and today the popularity of wine from Australia can be partially attributed to the brother’s hard work and vision of transplanting vines from this area to the down under continent.

After falling into disrepair, the non-profit Etiwanda Historical Society helped save the Chaffey-Garcia House and brought it back to its glory. Joseph Garcia, a retired Portuguese sea captain, built the majestic house around 1874. It was the site of the first electric light west of the Rocky Mountains and home to the first long distance telephone call in California. The house was moved to its present location in 1985. Today there are occasional tours of the home to show what life was like over 100 years ago. About 600 feet away sits the Chaffey-Isle House, which the Chaffey brothers built for their mother and sister. James C. Isle, one of the largest citrus ranchers of the time, purchased the house in 1902 and moved it to land where the 210 Freeway is now located. In 1998, the City of Rancho Cucamonga bought the house from the California Department of Transportation, and it was moved to its current location adjacent to the historic Etiwanda Pacific Electric Depot.  Have you visited this historic location?  Please comment below.

Our first visit is to the historic SYCAMORE INN

The Friends of the Pacific Electric Trail recently committed to launching our YouTube Channel and visited some of the historic landmarks that grace our city.  Our Media Team visited several locations, including:

Just to name a few

In the coming weeks we will be adding additional videos of trail safety, bike repair and of course the 21-mile Regional Pacific Electric Trail.  If you enjoy the PE Trail and have a suggestion for a future episode, please comment below.

We seem to always be passing by the Sycamore Inn. Driving by, or riding bikes past it, or even walking by it. But when you stop there, you cannot help to be struck by its early California charm and its’ important place in Cucamonga’s development.

Early in California history, the wide boulevard that calls home to the Sycamore Inn was just a dirt path called the Santa Fe Trail. In March 1774, it was this trail that brought Spanish explorer Captain Juan Batista de Anza to this lush oasis of giant Sycamore trees, situated next to a natural creek from the majestic mountains above. 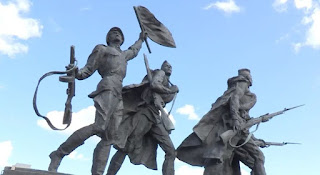 The local Kukamonga Indians invited the Spanish soldiers to remain in the oasis for a while, and the Spaniards were taken with the way that the local natives seemed to share the site that was teaming with wildlife. This grove of Cottonwoods, Willows, Sycamores, and trickling creeks, joined by relatively friendly California bears was named by the Spaniards "Arroyo Los Osos", later translated to Bear Gulch, a name that remains to this day.

The Spaniards enjoyed this lush region of California and some, decided to remain.  Felipe Santiago Tapia, one of Anza’s original soldiers, was one. 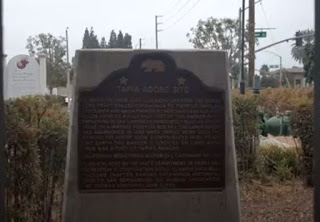 In 1839, the Spanish Governor of California, Juan Alvarado granted Felipe’s grandson, Tiburcio Tapia, a land grant of over 13,000 acres, named Rancho Cucamonga, which lay between Rancho Santa Ana del Chino in the south to San Bernardino in the East.  Don Tapia immediately began construction on an adobe ranch home on the crest of Red Hill, overlooking the oasis at Arroyo de Los Osos where his grandfather once camped with the Anza expedition.

By the mid-1800's, the dirt road that ran past the lush sycamore grove had become a main thoroughfare from San Bernardino to the growing communities of Los Angeles to the West.  Horses, wagons, carriages, and stagecoaches dug deep ruts into the well-traveled road. Eventually William Rubottom, affectionately to be known as "Uncle Billy" recognized opportunity and saw value in a strategically placed inn and tavern that could provide warm hospitality to weary wayfarers and locals settlers, anxious to share an evening of relaxation with each other.

That old dirt road that fronted the Inn became the fabled Route 66, the primary route from points east in Chicago to the Pacific Ocean. During those colorful years of the 30's, 40's, 50's and 60's, before freeways, the Inn hosted the rich and famous...movie stars and notables, both the famous and the infamous, en route to Las Vegas and Palm Springs. The Inn is rich with folklore. Legend has it that both Marilyn Monroe and Elizabeth Short (the "Black Dahlia") dined at the Sycamore in the weeks before their untimely demise. Other notables claiming to have eaten at the Inn include Al Capone, and Bugsy Segel....We all know what happened to them.

A new generation of hospitality began in 2002. Proprietors, Linda and Chuck Keagle, Brady Main, and Executive Chef Louis Alvarez, long-time restaurateurs, became enthusiastic owners of the historic old Inn. With a renewed vitality, and an affectionate recognition for the rich tradition of the Inn, the new owners have continued the long tradition of hospitality and good food, excellent service, and a welcoming ambiance, the new Sycamore Inn honors its roots and welcomes new traditions.  Do you have a favorite story to share about the Sycamore Inn, please comment below.

Posted by Friends of the PE_TRAIL at 10:14 AM No comments: