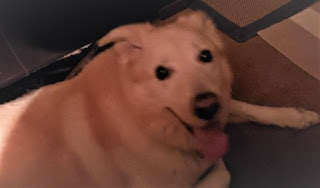 Allow me to introduce myself, my name is Lady, and I am a gorgeous Golden Lab who was just unanimously voted the cutest dog on the Pacific Electric Trail.  It’s about time that I got the deserved recognition that I’m due.   I have done a bit of traveling and have lived in Rancho Mirage, Albuquerque, Kauai, then back to California where I call Oceanside my home with my pet human, Russell.  I was just a little puppy at the doggy orphanage when our eyes met, and he could see that I was so cute but scared, so Russell adopted me and took me home. Yes, it’s true, blondes do have more fun.   We take good care of each other and have been “besties” for 14 years.

I have another roommate/bestie named Myrtle who is part of our kennel/home.  We all go for walks together and keep each other company while the humans are at work.  I miss my older brother, Cosmo who used to play with me as a puppy but eventually I grew up and let him know that I was the top dawg.  He is gone now, but his scent is still in my nose . . . I will never forget him. 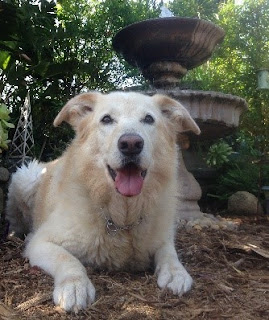 I like walking on the P E Trail mostly in the morning when I have more energy.  The Trail seems to have gotten longer as I have gotten older.  I am a frequent visitor of the Trail when I go on vacation to my home away from home in Rancho Cucamonga.  One of my favorite spots on the Trail is the Route 66 Trailhead because there are so many other four-legged friends to meet there.

When I am walking on the Trail, I can tell who has already been there because my nose tells me if a coyote or a pesky squirrel or rabbit or other mysterious canine cousins have been there before me. These days, everyone is preoccupied with taking pictures of themselves and their canine friends, and without asking for permission I might add!  Didn’t they get the word yet that I have been named the cutest dog on the Trail? 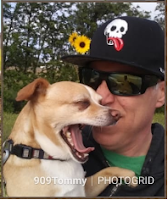 So, while Tommy may be the reigning King of the Trail, he now has a Queen.  Tommy can still occupy his throne, but this new Queen wants to know, “So where’s my crown and is it made of rawhide?”

It is time for my afternoon nap now and I only have one pet peeve:  my belly does not get rubbed enough for my taste, more pampering please.

- Lady (without the Tramp)
Visit our Website more information 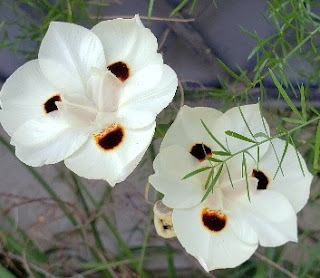 Fathers are indeed special and treasured, especially when they remind you of your family history and how important that is to understand the significance of who we are and who we come from.  My father’s family descended from eight generations of entrepreneurial, creative, resourceful, talented, respected people.  He grew up in a loving home that taught him the value of striving to do your best.  He was surrounded by loving grandparents, aunts and uncles and a Father who taught him the value of civic duty.  Education was always a priority, so homework always came before his chores.  His outgoing personality naturally led to leadership positions, even in grade school.  He excelled in school and sports and when he returned from serving in the Army, he joined the American Legion to give back to his community where he served as Post Commander. 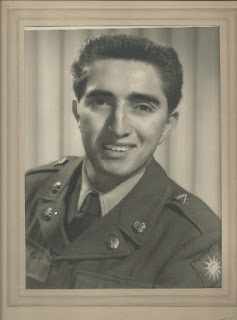 When my father entered the room and held out his hand to shake yours, it was authentic and sincere, and you knew that you just met a new friend.  He would light up the room with his smile and charm and make you feel like you were the most important person in the room when he would start a conversation with you.  We used to kid him that he was always “running for office,” because he was sincerely interested in everyone.  Morrie grew up in the generation of patriotism and love for country which eventually led him to a lifetime of serving his community and veterans returning from service.  When there was a project or an event to plan, he was right there to gather the troops and get the job done.  Hard work was nothing to shy away from because he was taught that hard work always works. 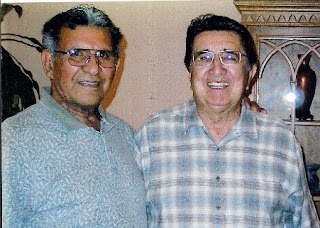 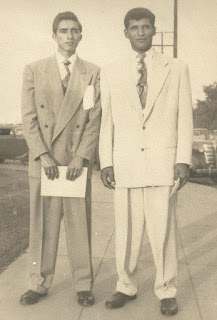 His life was full of valued friendships that began in grade school and continued throughout his lifetime.  He was a devoted friend and you knew it if you had the pleasure of being a part of his treasured inner circle.   It was only after growing up, that I deeply appreciated the depth of his many natural gifts and talents.  Getting to know him as an adult and sharing each other’s lives was priceless.  Our birthdays were two days apart, and he never forgot to ask me how many candles would be on the cake each year.  He was proud of my accomplishments and supported the projects that were important to me and my community.  He loved music, he was a musician, he loved to dance and taught me how to command the dance floor and not skip a beat.  He was proud of his indigenous heritage and reminded us how important it is to celebrate being native.  He had a gift of describing history with his recollections of stories that were passed on from his grandparents.  Stories about our ancestors who lived at the base of the mountains and fished in the liquid trails that eventually lead to the ocean.  His generosity came straight from his heart and was so special.  As a retired veteran himself, he would regularly drive through several counties to visit the soldiers/patients who were at the veterans' hospital in Long Beach, bringing the patients books, magazines, toiletries but mostly to visit with them and let them know how much they were appreciated.

Sadly, our conversations ended five years ago and with this Father’s Day, I struggle to try to explain to him, what has been happening in the world.  In better times, we would be celebrating Father’s Day together and enjoying each other’s company.  He would be telling us yet another story from his early days that never ceased to amaze me, because I was always learning something new from him, even towards the end of his life.  I had the presence of mind and the pleasure of recording his oral history along with my siblings.  While I had prepared a barrage of questions to ask him, I was in no way prepared for the level of detail that his razor-sharp mind could bring up from over 70 years in the past.  If an anecdote brought up a name from his grade school days or his colorful neighborhood, he would go on at length about that person’s family members, where they lived, what professions the parents had, etc.  It was obvious that he had trained his mind early on to remember even the names of his teachers, principal, coaches and neighbors. 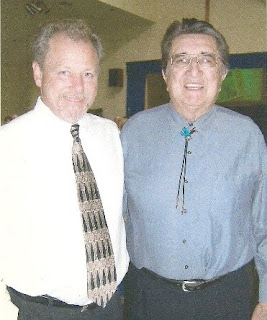 His recall was almost newspaper accurate with its’ clarity.  Back in the day, it was common for aunts, uncles, sisters, and grandparents to live next door or across the street or around the corner from each other.  This rich fabric of family ties helped shape his childhood and early adulthood. He instilled in me a thirst for knowledge and understanding.  He delighted in my family and celebrated the relationships with my husband and sons.

There are the little things I remember that he taught me as a child that I did not understand at the time but eventually learned to appreciate.  As a little girl, he would take my sister and I to visit friends and family so that we could stay connected to our cousins, etc.  We were always dressed in matching dresses, hair combed in ponytails when my father would walk us around the gathering saying hello to family friends, grandparents, aunts, uncles, and cousins.  We were bashful and did not know how to receive or accept a compliment very well.  I will never forget what my Father told us, “You will have to learn how to receive a compliment graciously” and not run and hide under the kitchen table.


The first time Father's Day was held in June was in 1910.  A woman called Sonora Smart Dodd was an influential figure in the establishment of Father's Day. Her father raised six children by himself after the death of their mother. This was uncommon at that time, as many widowers placed their children in the care of others or quickly married again.  Father's Day was officially recognized as a holiday in 1972 by President Nixon. Fast-forward to Father’s Day 2020, due to the COVID-19 virus, we remain in quarantine and unable to gather with our families to celebrate our Dads together.  Fathers still need to be remembered and recognized for the important role they had in shaping our lives.  They mentored us, fed us, disciplined us, guided us, encouraged us, loved us, taught us, and treasured us.  Our fathers were our strength and protected us from danger even when the fear was only imaginary. 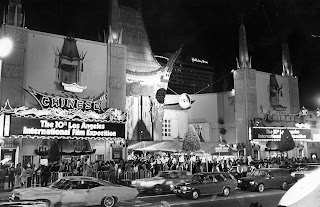 Daddy read us bedtime stories and tucked us into bed and later, taught us how to drive, he introduced us to culture and took us to our first movies at Grauman’s Chinese Theatre in downtown Los Angeles.  Dads are special in every sense of the word and there is not a day that goes by that I do not think of many of our conversations together over a cold beer and a taco.  He lived his life with purpose and meaning, which naturally mirrored his favorite Native American Prayer:

I miss his voice, his smile, his quick wit, his laughter, and his company.   I am my father’s daughter and so immensely proud to have had the world’s best Dad to teach me how to be a human being.  Happy Father’s Day Pops, I love you Mucho, your Lazybonz.
What's your favorite memory of your father lets us know in the comments section below.