E-Bikes are changing the landscape of Cycling

The landscape of cycling has been evolving for over a hundred years and with new technology along with light-weight materials, more and more of us might be curious about the e-bike experience.  Even though I consider myself somewhat of a traditionalist and ride using a road bike on a regular basis, I recently added a folding bike to my collection and now that one has become my favorite.  It is lightweight, easy to transport in my car (no bike rack required) and allows me to sit more upright, thus reducing my need to lean forward on the handlebars.  For whatever reason, it appears that I can go faster on my folding bike and I do not feel as fatigued after a great bike ride.  There has been a gradual increase of electric assist bikes over the past few years along the 21-mile Regional Pacific Electric Trail.  In addition to the variety of scooters, rollerblades and skateboards,  I do admit, I have been a little curious about the ease of the ride versus the additional weight of an E-bike.

Fast-forward to the COVID-19 pandemic and the desire to maintain our exercise routines as so many of us are working from home. Bike shops were swamped with new customers who wanted to get back to their childhood memories of bike riding for fun and exercise.  Traditional bike shops started to carry electric bikes in addition to their stock as older cyclists wanted something new to try.  Personally, I enjoy the physical workout that cycling provides me, because I must work at it to challenge myself with every new adventure.  E-bikes might be fun to try while on vacation, especially when sight-seeing or traveling to your favorite eatery, without having to exert much energy or to reduce the overall time involved. Popularity of e-bikes has been skyrocketing as people continue to head outdoors during the coronavirus outbreak, especially with older riders.  Nationally, sales of e-bikes are up almost 60% as of June, according to recent market trends. Last year, unit sales of e-bikes rose 73% at specialty shops after more than doubling the previous year. E-bikes might be pedal-assist, requiring constant pedaling, or have a throttle, which does not require pedaling at all. They are easier for tackling hills and headwinds, they use batteries — unlike mopeds that use gas-powered internal combustion engines. E-bikes weigh more than traditional bikes by 10 to 15 pounds, and they come with a higher price tag.  According to the National Bicycle Dealers Association, the average retail price for an e-bike at a specialty shop is $3,500, much more than a traditional bike. A recent study found older cyclists using e-bikes not only were getting the same brain benefits as those on standard bikes. E-bike riders showed an improved sense of well-being and rode more often than the others.

Regulations vary around the country over the bikes’ use and are gaining in popularity.  In many states, slower speed but not high-speed versions are allowed. With the world of cycling changing so quickly, it is a good rule of thumb to check with your community on the guidelines for using electric assist bicycles or electric bikes that include a throttle. In New Mexico, for example, electric bikes are subject to licensing and to the same insurance requirements that apply to motor vehicles.  The city of New York recently ended a crackdown and now allows electric bikes, which are widely used for food deliveries. In Wisconsin, the police department in Green Bay has outfitted its bike patrol with e-bikes. This summer, the bike share program in Madison became the first citywide system in the United States with a fleet consisting entirely of e-bikes.

On the national level, the U.S. Department of Interior, which oversees the National Park Service and other federal land just announced  days ago that e-bikes going up to 20 miles per hour would be allowed on trails and in areas where conventional bikes are permitted. E-bikes offer clean alternatives with no emissions, and extend the range of riding a traditional bike, especially if you are new to cycling. 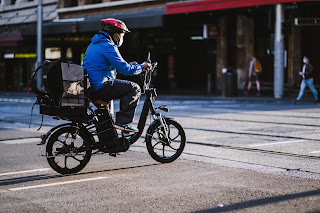 There are several categories of E-bike buyers, here a few: Commuters who use their e-bikes primarily as a means of transportation, people who are trying to be socially distanced by not taking public transportation, E-bikes are filling that void for them. People who are not cyclists but who have reached a stage in life when they are looking to stay active such as couples, especially avid cyclists with partners who are not as physically strong and want to ride together and people who need accommodations. 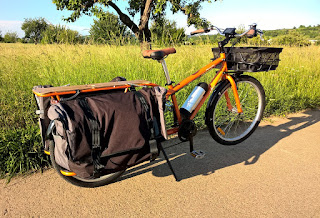 E-bikes come in a variety of types. Some are better for commuting than others. Some are cargo bikes that allow riders to use them for shopping trips. E-bikes tend to be much heavier than regular bikes, with the battery accounting for much of the additional weight. The typical non-electric road bike weighs 20-22 pounds, but most e-bikes weigh 45 to 75 lbs. E-bike tires are wider, too. The tire on a traditional road bike is usually less than 1 inch wide, but e-bike tires generally run 1½ to 2½ inches for road bikes, 3-4 inches for mountain bikes.

Like traditional bikes, e-bikes have multiple gears. They also have multiple levels of electrical assistance, usually four or five, so the rider gets to choose how much of an assist the bike provides.  For e-bikes to be legally classified as bicycles on city streets, they are limited to 1 horsepower with a maximum speed of 28 mph and most are programmed to stop delivering electrical assist at 20 mph.  According to a University of Colorado study in 2016, riding e-bikes delivers health and fitness benefits, especially for people who were previously sedentary. Researchers saw improvements in aerobic capacity and blood sugar regulation.  Regardless of how you exercise via a bicycle, on a mountain bike, road bike, e-bike, or stationary bike, riding a bike for fun also improves our mental health, especially during this extended pandemic. Whatever way you ride your bike, always remember to wear your helmet, and obey traffic laws, especially when crossing at the light. Keep in mind that just like an electric car, others cannot hear you coming up behind them, so include a bike bell to ensure others know you are approaching. Does the thought of riding an E-bike sound interesting?  What is your cycling preference, please comment below?

Posted by Friends of the PE_TRAIL at 8:27 AM