STAY IN YOUR LANE

These are all metaphors of warnings with similar meanings, but different scenarios. Whether it is about driving, personal behavior, or maintaining a military position, they all direct us. And we need good orderly direction! When I commute to work each morning, my fellow travelers can barely hold their lane on the road as we hurdle along on congested freeways at 75+ miles per hour. Can you imagine the chaos of going just over to your local market if others were not directed to not drive into the space that you are occupying on the road? Anarchy would ensue! 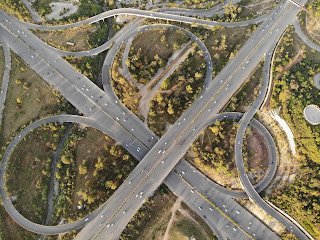 We all have moments of distraction and can drift out of our lane. Fortunately, here in California we have “Botts Dots” that we can both feel and hear when we wander outside the line. Many a sleepy driver has been saved by this brilliant design invented by Elbert Botts in the 1950’s. But this system does not work in climates where there is snow fall because the snowplows would scrape them up with the snow.

So, who gave us the lines that keep our driving lives in order? One of the first recorded use of lines in the road can be traced to Pope Boniface III in the 1300’s. When gathering the faithful to Rome there became a need to separate foot traffic from horse and cart traffic. Seeing the need, he had a line marked down the middle of the road. Good orderly direction. 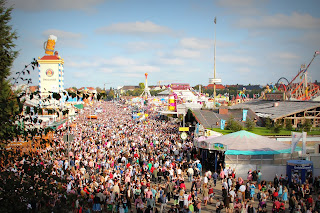 As traffic evolved throughout the centuries and roads became more traveled, ruts would be cut into the road when it rained. After the rain, the roads would dry out, but the ruts remained. So, the common practice was that carts had the right of way so their wheels would fit into the slots of the ruts and deliver a smoother ride.

In England throughout the middle ages it became an accepted rule that traffic moved on the left side of the road. The thought behind this is simple. If the person approaching you from the other direction was an enemy, then your sword hand is free to defend or attack with. 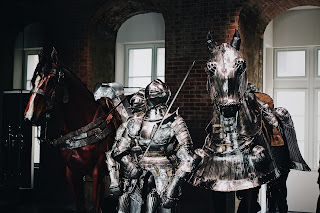 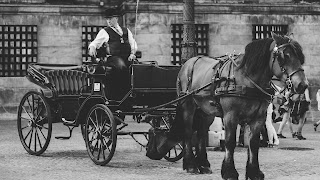 Progressing to the 20th Century, New York City started marking a line across the road to keep pedestrians from interrupting the flow of commerce traffic. These lines became known as “crosswalks.” At the beginning of the worldwide auto boom, England and Europe led the charge, but when Henry Ford revolutionized the manufacturing of the automobile with his moving assembly line, he changed life in America and the world. This change lowered the price of a produced auto by half making it attainable for more Americans. Then he raised the wage of his factory workers to $5.00 per day, which at that time was unheard of. His workers now had a higher standard of living. That evolved to home ownership and discretionary funds that could be used to purchase an auto. With those two financial windfalls to the public, Ford still realized a greater profit on each vehicle. Within 10 years America out paced the rest of the world with automobile ownership. Add to that the sheer size of the United States and an automobile was the only practical way to see it all. 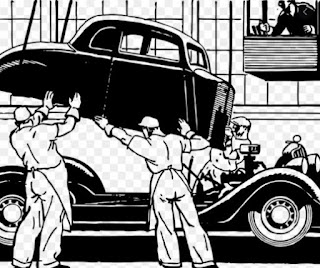 As cars became more popular and trucks evolved in size and use there became a need to direct the flow of traffic. Many early auto enthusiasts experienced the drama of being run off the road to avoid a larger vehicle traveling at a high speed. Connecticut is credited with creating the first speed limits of 12 mph in the city and 50 mph in rural areas. I’m sure that when cars went speeding by at 50 mile per hour, farmers must have thought that the world had gone crazy.

Michigan holds the designation of striping the first street lanes as well as pouring the first concrete streets. Michigan’s Edward M Hines got the inspiration for a center line down the street when he saw a milk truck going by leaking milk out of the back onto the road. And as different parts of the country developed their own traffic controls it wasn’t until 1930 that a pamphlet was published to states that gave traffic recommendations to make things uniform.

In 1949 broken lines were introduced with two purposes intended. One they saved money by using less paint, and two it identified sections of road that it was okay to pass other vehicles. As you speed along the road did you ever think about those broken lines? Did you know that each line is 10’ long with 30’ between each line? So, as you speed by them from one stripe to the other you have actually traveled 40’.

So, now we evolve to the modern road which is constantly changing. Today's roads incorporate technology and years of study. We see green sections adjacent to curbs, bicycle symbols with chevrons above them, and in England they have squiggly lines that look to be a drunkard’s path of travel. On top of that, there are endless road signs both stationary and electronic. The demand for our attention while we drive is further bombarded by radios and phones. One could ask, what does it all mean and what do you want me to do?

Your DMV pamphlet is a great source of the ever-changing landscape of rules of the road. The bicycle symbol with 2 chevrons above it are sharrows which mean share the road. Simply put it means that the bicycle has the right to the entire lane. This usually occurs when the road closest to the curb is unsafe or restricted. If you find yourself behind a bicycle in this situation and there is a solid double yellow line at the center of the road you can feel trapped. But hold on, in this situation you are legally entitled to pass the slower traffic safely. Granted, you may be met with angry glances and looks of disbelief, but it is legal. Please note that safely is the most important word here.

The green marks along the curb designate a bike lane and the intent of the green is to make that space more visible to motorists. Other towns have adopted Bicycle Priority Zones, this is typical around college towns that have high density population with lower automobile use. We all pay taxes, so we all benefit from use of the same roads.  Transportation funds come from general taxation pools. Some may think that the taxes that they pay when they fill up  their car with gasoline gives them a priority status of road use, but most of those dollars go to repair the damage done to the atmosphere.

Looking at one of the busiest places in America, New York City, they adopted a plan in 2007 to separate lanes on a busy street for exclusive bicycle use along the curb. People were up in arms about it. Businesses protested; commuters complained but a funny thing happened. Between 2007 and 2018 bicycle accidents in that area went down 47% while retail sales went up 48%. The New York City Commissioner of the Department of Transportation knew she was on to something. DOT Jennette Zadik-Kahn read the tea leaves correctly, bicycles are good for business. Since then they have expanded the program. While cities across the country wrestle with budgets and traffic congestion, cities are finding solutions in “traffic calming” (ATP) Active Transportation Programs and “complete streets” design elements. Simply put, instead of trying to add a bike lane as an afterthought on an existing street, start at the curb side and build the bike/pedestrian accommodations at the beginning. Business’s like it when the speed limit is lowered for traffic calming because people notice them instead of speeding by. So, as we separate lanes to accommodate increased bicycle use and change the way that lanes are marked, it is all part of a century’s old evolution that should never stop as the needs of society change. But if you don’t like what is happening or want to give your input, you should contact your local, county, state, and federal representatives and get involved. They work for you and sometimes we just need to remind them of that fact, providing them with good orderly direction. And while you are doing that, stay in your lane. What was your favorite fun fact, comment below.