In its hey-day, this location was home to the Thomas Vineyard Company Winery which is located on the famous Route 66 in Rancho Cucamonga.  Prior to the Thomas Vineyard Company, AKA Cucamonga Winery, this location still proudly features a number of the historic monuments to the original owner Don Tiburcio Tapia and the original wine barrel from 1849 (The oldest winery in California) that is visible from Foothill Blvd., and a historic Mission Bell recognizing the famous El Camino Real 1789 & 1906.

The original winery has been reinvented numerous times over 182 years to serve the community in a variety of ways such as a restaurant, coffee shop and a wine tasting room. The front porch of the winery is home to the original grapevine planted near the entrance and has grown to cover the entire veranda.  You can’t miss the giant wine barrel that flanks the front door and a few feet away is the original paddle wheel that was used for grape crushing and was powered by the Cucamonga Creek.  There is a California Historical monument at this location honoring the TAPIA  ADOBE  SITE as well as another significant California Historical monument to the CUCAMONGA  WINERY that was donated in 1950 by:  the Ontario Parlor No. 251, the Native Daughters of the Golden West, Los Ranchos Parlor No. 285 and the Native Sons of the Golden West. 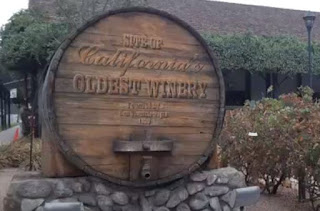 Cucamonga's first large planting was in 1838 at the Cucamonga Rancho by Spanish land grant that was deeded to Don Tiburcio Tapia.  In 1859 rancher John Rains began large vine plantings (over 125,000) in Cucamonga and started a revolution by introducing agriculture on a large scale to replace cattle and sheep raising. By 1917, Secondo Guasti was advertising his vineyard as, "The Largest in the World." Cucamonga-Guasti vineyards spanned over 20,000 acres. Prohibition which should have hurt the Cucamonga Wine Industry during Prohibition (1919 – 1933) but due to a small variance, local vintner’s could produce sacramental wine as well as wine for personal use and were able to operate at a reduced production. 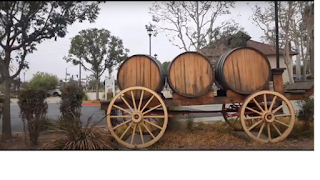 The Cucamonga Winery was started by Alfred Accomazzo and his brother Eduardo Accomazzo after Prohibition in 1933. The Cucamonga Winery is closely connected with the founding of the city of Cucamonga, California. The Accomazzo brothers came to the United States from San Desiderio in the “Asti “region of Piedmont in northwest Italy at the turn of the century, 1902. 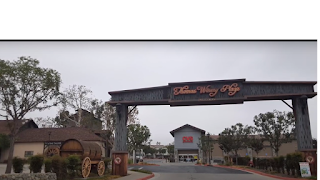 This previous winery location while historically was a landmark for people traveling the original Route 66, continues that legacy as an anchor for Cucamonga businesses.  This stop was the half-way mark on route from Palm Springs to Los Angeles and was where customers migrated to in search of purchasing cases of wine from this region.  The Thomas Winery Plaza retains the charm and pays homage to the past by preserving the rich history of the wine making business in the Cucamonga Valley.  What is your favorite memory of the Cucamonga Winery AKA Thomas Winery?  Please comment below.

Watch Tales from the Trail here

Posted by Friends of the PE_TRAIL at 9:27 AM